A Time When BioWare Was On Top

Over a decade after the release of Dragon Age Origins, BioWare has been in an interesting spot in the gaming world for the past five years. What was at one point one of the most legendary Western developers was now a company recovering from one of the lowest periods in its lifespan. Throughout the 2010s, many key members of BioWare were coming and going, including important members of the writing and development teams. Changes in work ethics are reflected in its more controversial entries in the series, including the lackluster Mass Effect: Andromeda and the infamous Anthem. In Anthem’s case, it was such a disaster that BioWare decided to cease support of the game in February of this year, a full two years after its original release in 2019.

While Mass Effect is BioWare’s darling who excels in sports, Dragon Age is like the younger sibling who is an academic prodigy living under their older sibling’s shadow. As someone who has played both the first Mass Effect and Dragon Age Origins around the same time, I found myself gravitating towards the latter for the relationships that The Warden forged with their characters, a traveling party seeking to vanquish a bigger evil, while Mass Effect felt more like a space opera bringing as many aboard as possible.to vanquish a bigger evil.

Okay, so it’s about the same premise for the most part, but it’s apples and oranges depending on whether players prefer first-person shooters or action RPGs. Even if players weren’t interested in the specific type of genre, players found both franchises easy to digest as even if players weren’t good at shooters and RPGs, the games were easy to grasp in their basic form.

The premise for Dragon Age Origins begins with an unnamed character who is recruited to become a Grey Warden, a group of gifted individuals tasked to destroy the Blight, a widespread plague that summons hordes of demons known as darkspawn. Unfortunately, the entire order gets wiped by the darkspawn except for the protagonist and one other member, which requires the two to gather capable allies to aid them in their original journey to vanquish the Blight. 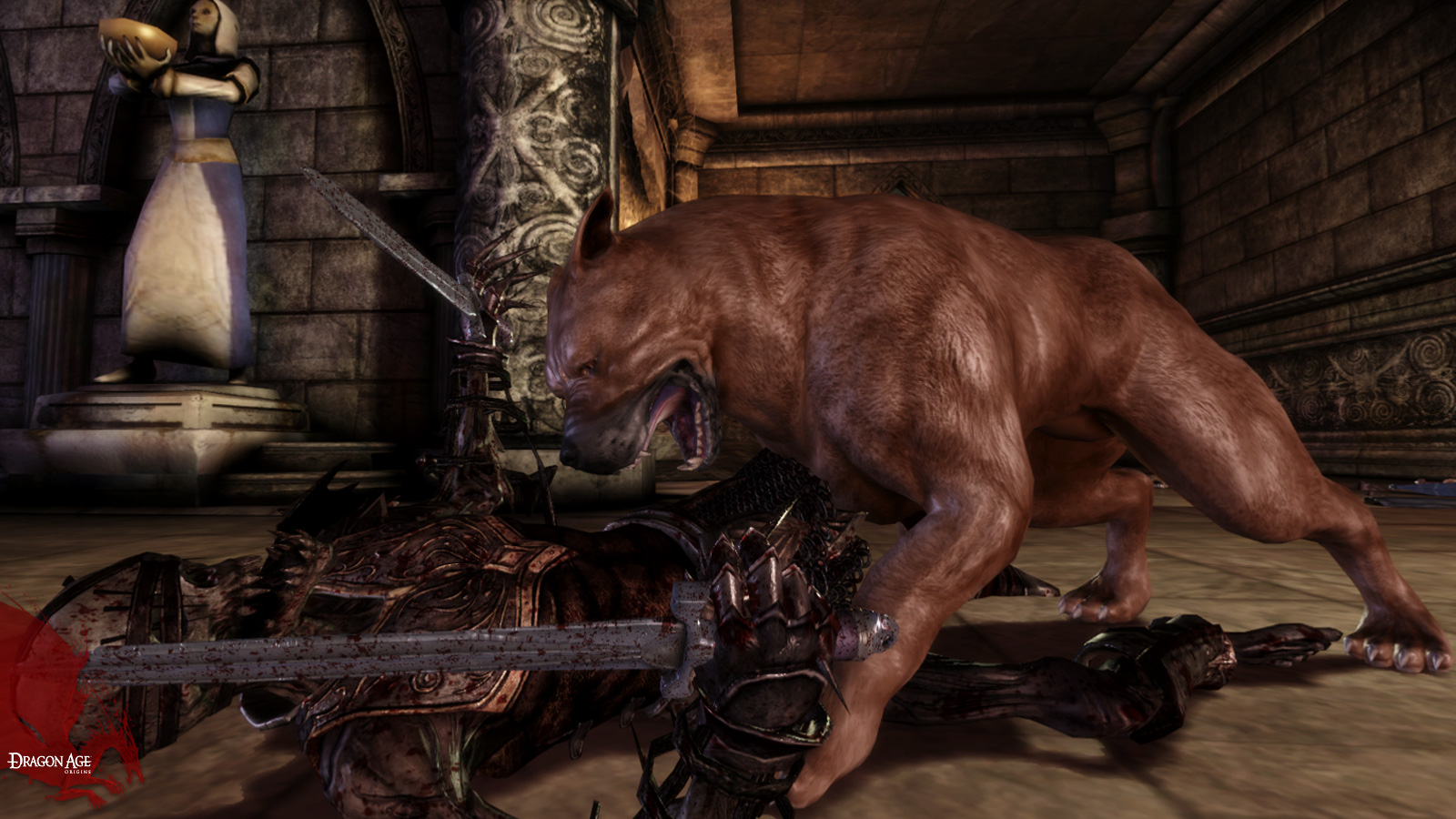 What made Origins a sell for me, a tradition that would continue in Dragon Age 2 and Inquisition, was the background story of the protagonist. As the name suggests, players can determine The Warden’s origin story, determined by the player's race and class. A character who is of the Elven race, for example, can be either a City Elf or living in the forest amongst the Dalish. Depending on their origins, their lineage is referenced by other characters, party members, and NPCs, with an optional side-story given to the player as a way to wrap up the character’s origin story. This offered a layer of personalization, giving each character a different background rather than a cut-and-dry origin story as would be the case with its sequels.

The gameplay is similar to another BioWare title at the time, Star Wars: Knights of the Old Republic, focusing more on the “RPG” in “Action RPG.” While battles are in real-time, players can switch between party members at any time, giving them commands to maintain the ebb and flow in combat. Characters who aren’t targetted will act freely, yet movement felt constrained to a certain place during a fight. The game was not perfect as this would often lead to glitches, some game-breaking that can skip entire zones, making the title popular with speedrunners.

Despite this, Origins was an engaging story and it was the first time where I felt like my decisions mattered in a video game. When Origins was released in 2009, there were many games prior that advertised that “your choices matter!” but the fate of important characters and the ending is already predetermined. Origins raised the bar by forcing the player to face the consequences of their actions, going so far as losing party members permanently if a certain decision is made over the other. As your entire party stems from all walks of life and backgrounds, there are decisions that the player will make that will force the party to come at odds with each other, allowing a bit of diplomacy to keep said party members from leaving or turning hostile.

Dragon Age Origins Did What Very Few Manage To Accomplish Today, Create Your Own Story

One of the major turning points happens towards the end of the game, which determines how The Warden eliminates the Archdemon as the source of the Blight. The only way for the Blight to end is for a Grey Warden to destroy the Archdemon itself. However, in doing so, they would give their own life in the process. With this in mind, the main protagonist can either sacrifice themselves to destroy the Archdemon, have their Grey Warden companion Alistair commit the sacrifice in their stead, or a third option, have the witch, Morrigan, bear your seed, in which said seed now contains the very essence of the great evil you have slain. While this option is just as, if not more ambiguous than the witch who proposed the action, to begin with. This becomes even more chilling if you happen to play a female Warden like I did, as the task will fall on Alistair himself.

Needless to say, forcing my soon-to-be husband to have sex with an attractive yet highly dangerous witch, resulting in a potential demon spawn baby in exchange for the both of us living, is one of many possible endings that are all considered canon. The scenario gets spicier if more details are added on, as my Warden and Alistair rule the land as Queen and King. Unbeknownst to the King, my Warden has a mistress who happens to be one of the party members who allied with me in defeating the Archdragon.

Needless to say, the amount of creativity involved in making your own story amidst an existing plot is similar to that of Dungeons and Dragons titles such as Neverwinter Nights, Baldur’s Gate, and other open-ended role-playing games. These options also persist through its sequels, despite platform differences. This is largely thanks to the engine that Dragon Age Origin runs on, meaning that player choices carry over to the following sequels through the use of the “Dragon Age Keep.”

Before the release of Inquisition, Dragon Age 2 utilized the save data from Origins when it comes to the former’s story. Many minor details referenced Origins depending on how the Warden handled specific tasks, with the major detail being the ending. If Alistair lived in Origins, for example, he appears as a cameo in a side quest. Certain characters who appeared in Origins and its interquel, Awakening, appeared in the sequel with several being party members in 2.

Not to get too far ahead, the save system meant that your decisions affected the world around Dragon Age 2, even though the overall plot was the same. The transition from one generation to the next proved to be a challenge, as Inquisition was developed primarily with the PS4 and Xbox One in mind. Due to the difficulties in transferring save data from one gen to the other, the Dragon Age Keep was created as a cloud-based alternative. Linking your EA account to your Dragon Age games updates the Keep in real-time, reflecting on your changes in future titles.

Players concerned about losing their storyline in-between platforms can rest easy knowing that their progress is tied to their account. Many years ago, I played Origins and Dragon Age 2 on PC, but at the time I didn’t have a powerful enough rig to play Inquisition smoothly. When I played Inquisition on the PS4, all of the choices that I’ve made in Origins and Dragon Age 2 transferred over, despite the platform differences.

While it has been over four years since I played Inquisition, it’s nice to see that my profile is alive and well. It is expected that the Dragon Age Keep will be used in the development of Dragon Age 4, especially following the true ending of Inquisition.

Mentioned briefly, Awakening takes place in between Origins and Dragon Age 2, tying up loose ends in Origins while giving a backstory for the companion, Anders, who would go on to once again be a companion in the sequel as well as a central character in the game. A minor character who appeared in a side-story for Origins, Isabela, would return in the sequel with a fleshed-out story and a complete design overhaul.

Overall, Dragon Age Origins shows its age in many ways, pun intended, with the number of glitches and bugs that exist. However, players are treated to a rather interesting story that shifts according to player choices, with said choices carrying over to following games.

Were it not for this feature and immersion, Origins wouldn’t be a favorite game of mine, but due to the uniqueness in how the “choose your own story” storybook RPG was popularized with the series as a whole, Origins was a starting point to a series that would become a mainstay in many RPG fans to this day.